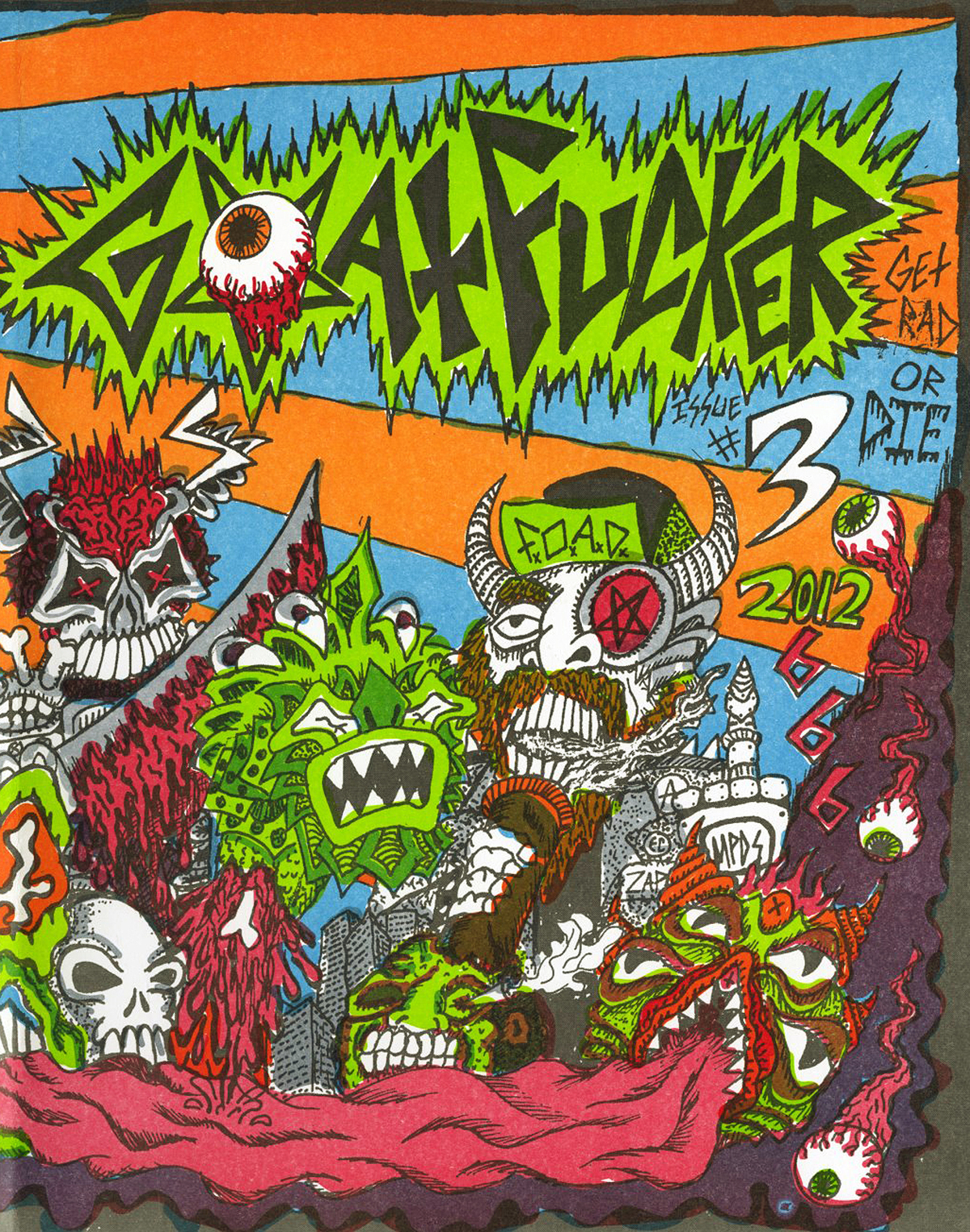 Founder and chief editor Jack Mulkern leads the issue with heavy metal reviews, as well as fucking the world over with its new outcast, Demon Destructo! Also the Mountain Wizard tells us how drugged up aliens are going to be our undoing, but forgets to translate the comic. His cover titled “Get Rad or Die” is inspired by the writings of David Wilcock. When 2012 happens, the universe will put us to a point to see if we are ready for the next phase. Only those of us who are rad enough will make it to the next level.

Randall Wayne Parker collides the city-beast onto the mountainsides in the fleshiest destruction the world has ever seen. He also brings us a special page dedicated to seeing life through his eyes, a cavalcade of thoughts and faces parading depravity.

Rob Steinberg delivers a one page comic about the space ritual that awakens this new age upon us. If you know if the awakening is positive or not then you possibly know whatever the fuck is happening. He also reviews his favorite low bro and high brow art movies. Ain’t nuthin’ like mixing uppers and downers!

Randall and Rob team up together for Skin Walker, a tale of a better world than ours where one can walk amongst the nippled space beast and drink hambraids.

Will Frank has a cartoonist close his eyes to look away from all the occult imagery to what his mind truly speaks of. It is a cataclysm that can only be expressed through Disney-like characters!

Jon Lennon cannot find approval from his mother, but luckily the banana man is always there for him.

Ryan Bock returns with a drawing that directs all eyes towards the goat anus. Even people in the drawing can’t look away.

Plus advertisements for Poser Disposing by Eric Miller and society altering drugs by David Schaeffer! Call now and receive a free totebag we found! Also by now, I mean in 2012 when the comic was published.

Pigs as naked cops by Mandibal as well as pigs having a Sabbath by Pete Hillstrom! You can’t have more pig than that! Well, actually Randall Parker showed me this one video…

I’m not going to keep describing art to you when you should be looking at it! In fact, if you look at the art then we can have a conversation about how gnarly it is. That sounds a lot better, a conversation about art rather than a one-sided description by some guy whose name sounds like a hair product.

You can be all like, “Magda Piech’s art was radical!” and I’ll be like “yeah, but did you see Kira Mardike’s radical page?” and then the conversation hits a lull and you shake my hand telling me that it was good that we saw each other, and then I see you walk four feet away and stare at your phone in boredom. You expect me to not notice that your standing right fucking over there not doing anything? You acted like you had something more important to do than talk about how radical Hashard Joao’s comics were as well?

The crowd fell silent as the beast was unveiled.

Gasps and screams filled the air.

They were starved for blood.

In each eye a reflection of the beast.

In each beast the reflection of a man.

They cannot kill the shadow. 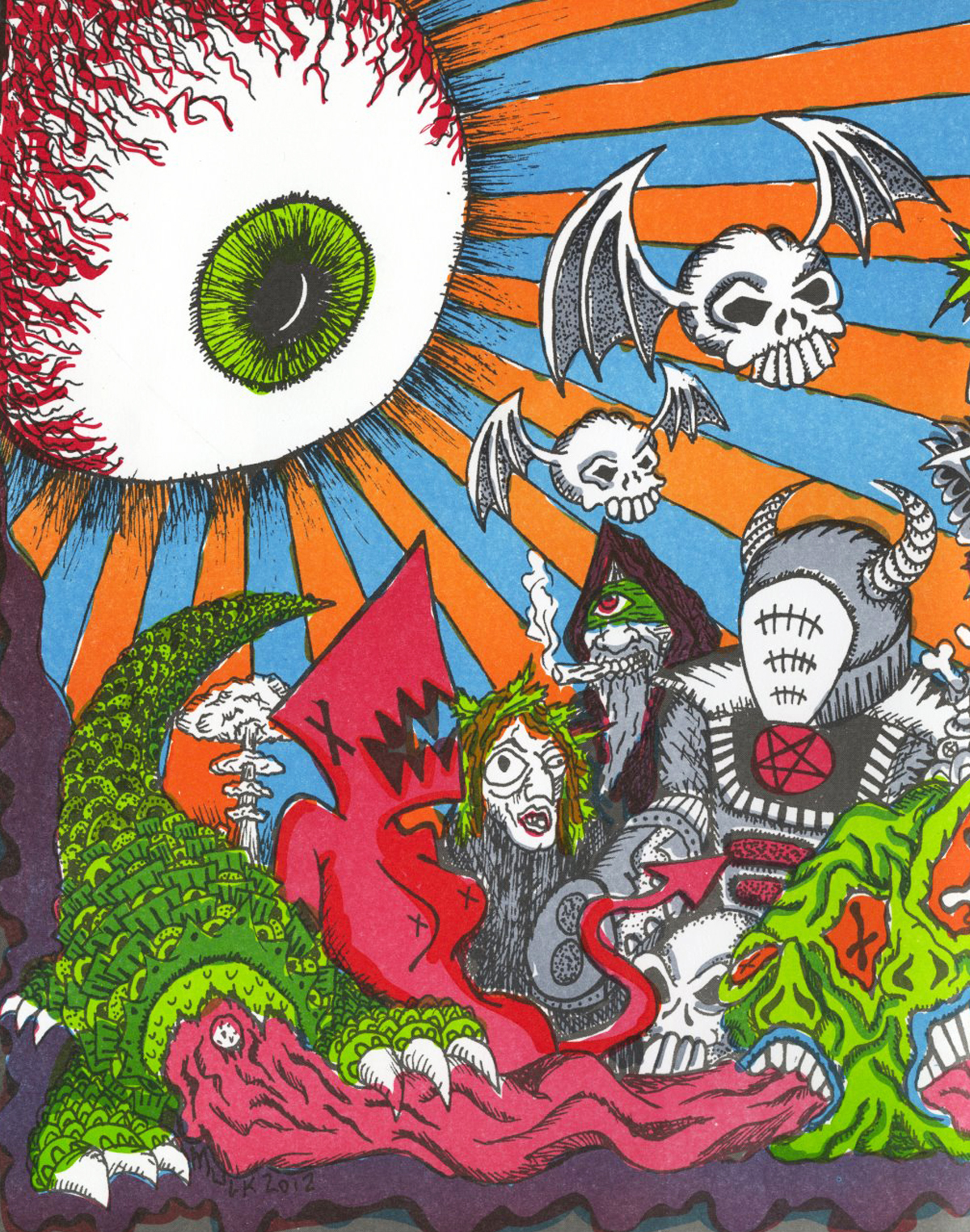